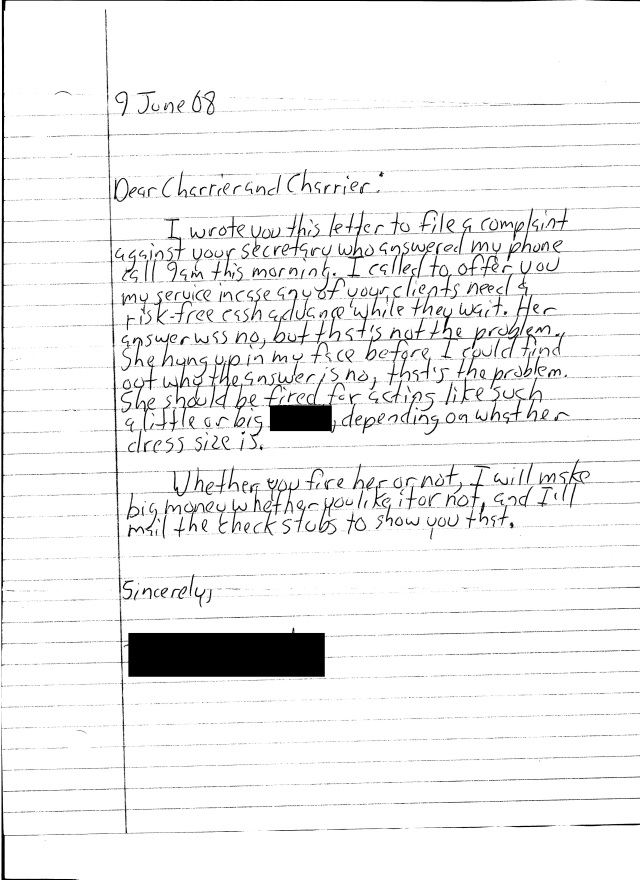 Oh my, I had a good laugh this afternoon.  I found a letter that I received in June of 2008 at my place of employment.  I received a phone call from a young man and he was wanting to set up interest free loans for our clients.  As many of you know, I worked for Charles Charrier for a couple years and did up until last week.  Anyway, I very kindly told him that we did not need interest free loans for our clients.  He was persistent and started asking nosy questions about our business, how we handle our client files, etc. and I basically told him that it was none of his business how we operated and that I hoped he had a good day and since he was still arguing, I just hung up.  We received numerous phone calls of that particular nature, he was not the first.

Anyway, the next day, my boss got a letter in the mail from this dude calling for my resignation.  Since my blog is rated G, I blacked out the name he called me.  But what cracks me up most about this letter is him telling us how much money he is going to make.  I don’t know what takes the wind out of his sails more: 1) the fact that he calls me an inappropriate, unbusiness-like name; or 2) that he is writing his very strongly worded letter, in pencil, on notebook paper.  Really?  He has yet to send me those check stubs, by the way.  I ran his name on Google and he graduated LSUA in December 2008 with an Associates in Art degree.  I was nice enough to black his name out.