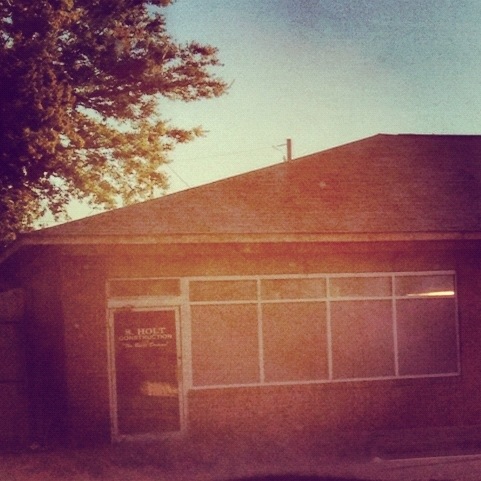 I would like to give a brief shout out and thumbs up to Holt Construction on Third Street. I pass their office building frequently and have often wondered how a construction company could have such a dilapidated looking roof. I would think it not much of a testimony regarding their services. I guess they must have felt the same way because lo and behold they took off the flat roof and built a nice new pitched roof within the past two weeks. It’s so nice to see businesses improving their buildings and facades. Especially on Third Street where it needs it the most. I hope they filed for their state tax credits! 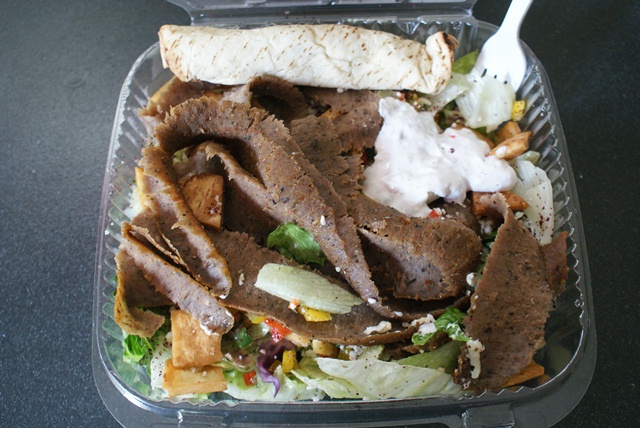 Gyro Salad with Apollo Dressing, side of Grecian Dip...good stuff!

I love mediterranean/mid eastern food.  Apollo is out of this world!  You definitely have to like and understand the culture in order to eat there.  I love their salads…the Gyro salad with the Apollo dressing is the best.  The chicken schwarma is an awesome choice too!

If you love gyros and Greek food, you definitely have to give this place some of your business.  I plan on trying my best to eat there as often as possible.  We need more places like this.  I am tired of the run of the mill chains.  Let’s keep these people in business!

I read a lot of ignorant things said in reviews about this restaurant most of it had to do with the culture or the ethnicity of the owners and NOT anything to do with the food.  This makes no sense to me at all.  The owners are very kind and I have had great service, with the exception of one blonde, very rude waitress who could not even pronounce gyro (yee-roh…yee-roh say it with me people yee-roh) correctly and then she proceeded to tell me that what I was ordering was not really what I wanted.  That’s interesting…I had ordered it several times before, I am so glad she can read my mind.  However, the owner came out and saw what was going on and recognized me and quickly took my order.  Unfortunately, you will run in to people like that anywhere.  So, I have no complaints.  The food is awesome!

As far as listening to the different music and the TV being tuned in to a middle eastern channel….uh…you are at a middleastern restaurant.  Do I really need to say more?  Enjoy your experience and enjoy the good food.

The next thing we can work on is getting Whole Foods to open up a store….now wouldn’t that be something?

1. Our numeral system (0, 1, 2, 3, etc.) are Arabic numerals.  This numbering system we use today, originally developed in India, was taught to Europeans and in the Americas by Arabs from North Africa.  Thus, the name Arab numerals.

2. Lebanon is called the “Paris of the Middle East”.  Lebanon was under French Mandate until their independence in 1943.  The official language is Arabic and French.  It is bordered by Israel to the South and Syria to the North and East. It is a very popular tourist area due to its mountains and beaches.

3. Beirut is the largest city and capitol of Lebanon with a population of 1-2 million people.  Beirut is named one of the ten most livelist cities in the world. 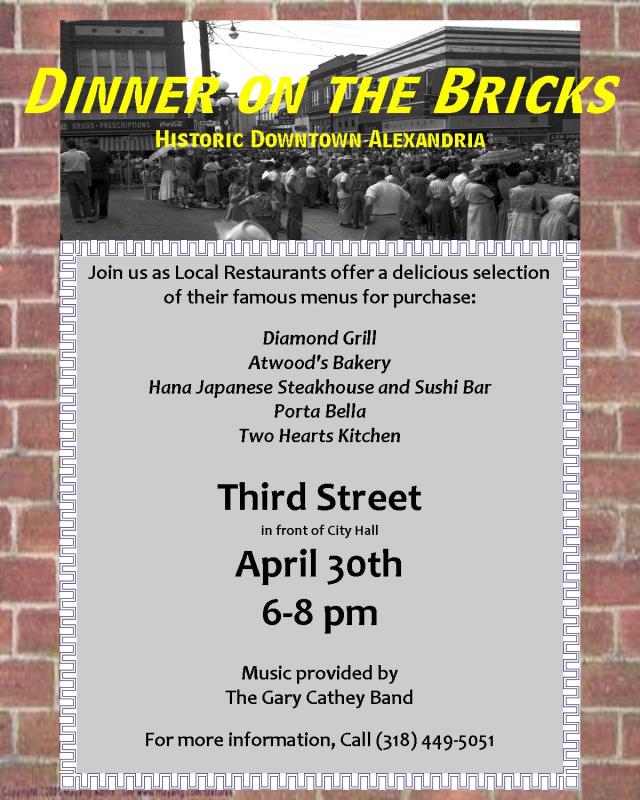 To all of my fellow preservationists, old house lovers and historians:

Mark your calendar and plan to attend the Louisiana Trust for Historic Preservation’s 30th Annual Preservation Conference.  This conference will be held downtown at the Alexandria Museum of Art.   There will be outstanding national speakers, educational sessions, an awards luncheon, property tours, and tying it all up will be events “On the Bricks” featuring downtown businesses.  The Historical Association of Central Louisiana will have a booth in the reception area on the first floor of the museum displaying and selling one of a kind works of various local artists and authors such as: Jock Scott, Rosalind Berg, Carl Laurent and many more.

Please make plans to attend!  Click here for more detailed conference information and to download the registration information.  Hope to see you guys there!  I will be……

(Not to be confused with our home, this is the bungalow next door that we purchased last week) 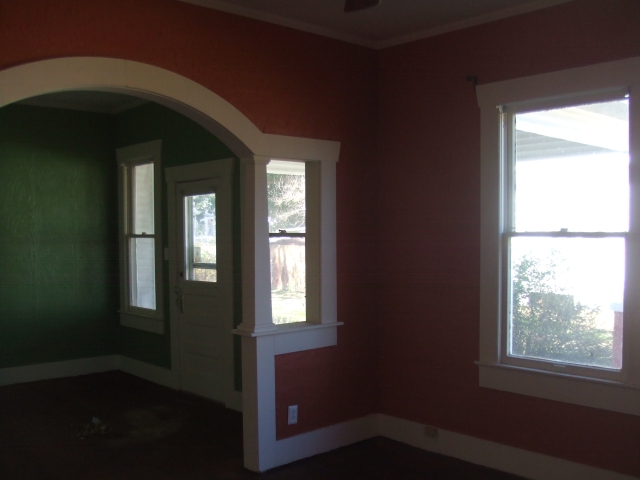 I use the word “fun” very humorously and saracastically.  Besides the “fun house” color scheme, there is nothing “fun” about this house!  The good thing is, it is in a LOT better condition than the other bungalow we purchased.  It took us nine months to return that house to a habitable state (this one is dubbed the “Little House” by our daughter).  This particular house (we shall name it the “Fun House”), was remodeled right before it was bought in May 2006.  The new owner made only three to four payments before he defaulted on it around late 2006.  On my way to work, I would notice now and again, things missing.  The blinds, a window screen, the flower pots, etc.  On my lunch hour one day, I caught a guy taking things in broad daylight.  He was cleaning the shed out.  He backed up his van and was loading flowerpots and other knick knack things that were housed in the shed.  I called the police.  By the time the cop got their, the other man was gone.  I gave her the license plate and told her that the man just left.  She said she saw him backed up to the house, but that he wasn’t taking anything real important, so she wasn’t really worried about it.  Besides (she said), I know him, he is harmless.  I stood there shocked!  He was stealing…….stealing IS stealing!  Since he was able to do it in broad daylight and the cops not stop him, that led to others coming in and taking what they wanted.  Anyway….we own the house now.  It is all shored up.  When I have the electricity turned on Monday, I will make sure the alarm is reset, have motion lights installed  and that will ensure that no one bothers this poor little house anymore.  I have not had any problems living in my house.  It seems that people will leave houses alone they know are occupied.  However, if they get wind that a house is abandoned or foreclosed upon, they come by looking to see what they can salvage.  But, even the richest neighborhoods are not immune to these happenings. 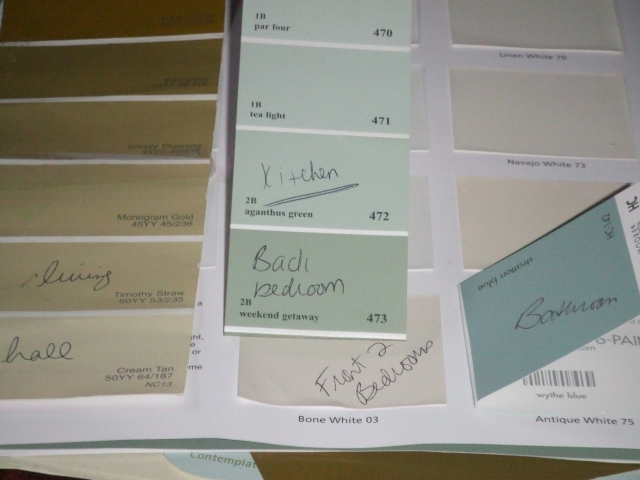 The Benjamin Moore store is able to mix anyone’s paint colors.  I will probably take all of these chips to them and let them mix it.  I love Benjamin Moore’s second tier “contractor” paint.  It is of a much better quality than Behr and it rolls on so nice and smooth.  It has less of an odor than Behr paint too.  Even nicer are Benjamin Moore’s premium paints, but I hate spending so much money on premium when the second tier paints are of a better quality than what you can get at Home Depot or Lowes anyway.

Here is a Lowes Color pallette: 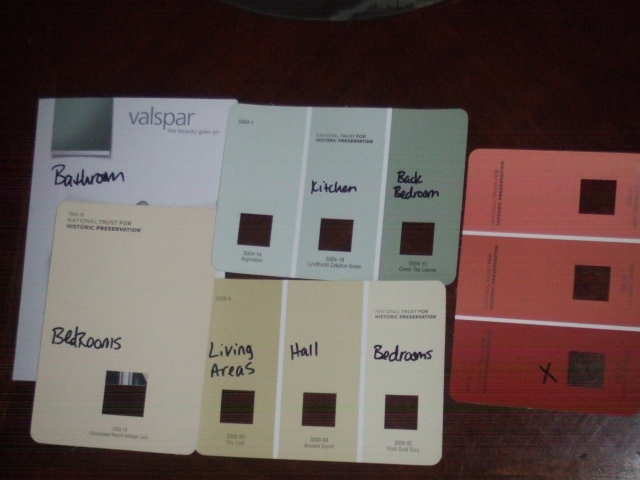 I guess I need to give my paint contractor a call. I am sure you all know her. She also happens to be my daughter. I guess a visit to Chuck-e-Cheese will be in my near future 🙂

The Historical Association of Central Louisiana, last night, hosted Pub Night at Finnegan’s Wake.  Even though the weather was bleak, the turnout for this downtown event was high.  Upon walking through the front door, you are immediately transported back to a gentler time.  I felt that instead of seeing modern conveniences, I should have seen gentlemen in top hats.

Noelle and Shannon Nolan, co-owners of the pub, mingled with the crowd and shared the highs and lows of their time renovating the beautiful building on Third Street.  The inspiration came from one of Shannon Nolan’s trips to England.  He visited a historic and well outfitted Irish pub and decided to come back home to Louisiana and try it out.  The result is the charming pub located at 812 Third Street named Finnegan’s Wake.  Shannon Nolan and Galen Bohannon (co-owners of the pub) both painstakingly restored this building with as many architectural materials that were still present in the building.  The other architectural details you see at the pub are architectural salvage finds from some of Shannon Nolan’s favorite vendors.  My favorite part of the pub is the beautiful set of windows that adorn the entrance of the building from floor to ceiling.  In the afternoon, the sunlight filters in filling the pub with a cozy glow.  My second favorite part is the gothic style church pews that line the back walls, and you must, must, must go check out the bathroom!  The bathroom is another piece of art all by itself as the fixtures, wood work and authentic wallpaper are a beautiful blend of tasteful style and history.  Many of the building’s light fixtures were restored and are used in the pub.

Jock Scott, a well known Central Louisianan, brought his recent work for purchase, the biography of his Aunt, a well known entrepreneur and businesswoman of the early 20th century.  Mr. Jock graciously signed his book and chatted with any historian interested in further details of his family’s history. While the Nolans enjoyed the company, Galen Bohannon happily served as bartender behind the counter.

If you did not come, we missed you!  If you did come, thanks for stopping by!  See ya next time.

Tomorrow is election day.  Get out and vote!

Finnegan’s Wake pub, co-owned by Shannon Nolan and Galen Bohannon, is a perfect example of what the buildings in downtown Alexandria can look like.  This building, beautifully redone and preserved, sits directly across the street from the once illustrious Bentley Hotel.  The inside is a sight to see and, if you decide to stop by, you won’t be disapointed.   From what I hear, this is a great place to stop by at the end of a long work day.  I have not verified this yet, I don’t drink.  But, if you run into the Nolans, tell ’em I said “hi” and to keep up the good work.