I just received this.  When I get more details, I will edit this post.  This is a picture of my house sometime in the early 1900’s.  Note the horse and buggy parked out front.  I am soooo thrilled to have this picture!  The turret (the cone) is long  gone and I have had an architect draw up some plans to restore it.  This picture is better than the other one I have.  I hear rumors that there are several pictures in existence, just tracking down who has them has been the hard thing.

Here is the only other picture I have of this house:  Click Here. 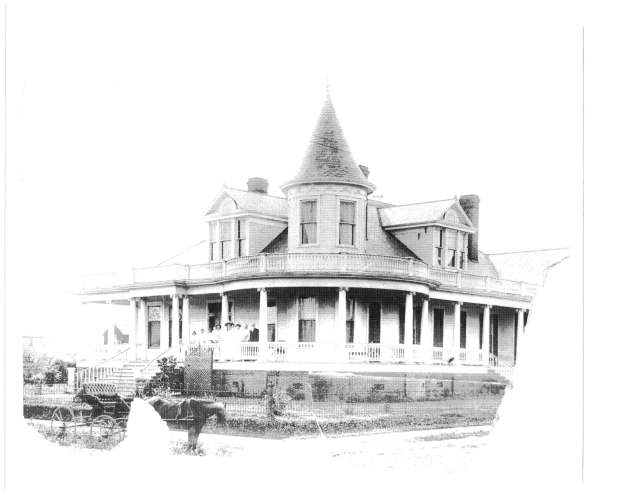 Early this year (January/February), I sent a letter to the Louisiana Division of Historic Preservation exploring the possibility of getting my house on the National Register.  I included the history and pictures of three more large notable houses that are in a row on the same side of my street and also gave a short history blurb on my home.  I understand from several sources that many people before me have tried and failed…but, people who know me well enough know that things like that don’t deter me.  What’s the harm in trying?  I said to myself, “If I get another rejection letter, I will just add it to the pile.”  So, I sent my letter on and waited for a reply.

I had a lady call me about a week or two after I sent my letter.  She was very excited to get my “preapplication” letter.  I was very excited and was wondering why others have had problems getting this house on the register.  Well, I did not have to wonder for long.  The lady on the phone did not read my letter and thought that my house was the Thompson-Hargis mansion. (I have a post on the Hargis mansion somewhere on here if you want to see a picture of it.)  I quickly explained that the Hargis home was down the street, but my house was the FIRST picture on the front page of the letter.  It seemed that she lost interest in our conversation after that point.  This lady (I am purposely not giving her name), told me that she believed my house was already in a National Register historic district and that I probably don’t need to apply.  I patiently explained that I was not in the National Register historic district, but I was in the local historic designation named Area 3, or the Garden District.  The whole time I was thinking that if she read my letter she would have known this.  She kept on the phone for forty-five more minutes trying to convince me I was in an area I was not, then she looked up the map and realized that I was not in that area, then she put me on hold…..you get the picture.  She did tell me that I would have to renovate the house and rebuild the turret before they would give my preapplication any serious thought.  To back track a little, I was told by historic minded individuals and also by the LDHP’s website that I must contact LDHP first before doing any renovations or making any modifications to the home so as not to jeopardize any possibility of a future listing on the register. I pointed this out to her.  She said that was not true.  After I hung up with her, I told my husband that the LDHP office must be run by idiots and I totally despaired of ever being able to obtain National Register status.  I told him we would just order our own sign and put it in the yard.

In the meantime, I hired a architect to draw the plans for the turret rebuild.  I already had an interest in restoring the turret, so we found Lestar Martin, a very capable, enthusiastic and historic minded architect.  I found out later that Mr. Martin is on the National Register nominating committee for the State of Louisiana.  Mr. Martin came by and was very positive about our home and the turret rebuild.  He felt that our home did merit National Register status.  His very upbeat attitude and positive comments were very welcome and infectious.  Mr. Martin drew up blueprints to restore the turret and also did a rendering of what our house would look like now after all of our repairs were made.  It is beautiful!  I scanned it in to post on the site here, but the file is too big.  Sorry guys!

Anyway, I said all of this to say, I received a call from Pat Duncan at the LDHP about a week ago.  My file was transferred to her and she read my letter.  She agrees with me that the area my house in is very historic and warrants National Register status.  Although we did not discuss listing my house individually on the National Register, she did say that she is going to nominate the four houses in a row on Florence Avenue as their own separate National Register Historic District!  So, my house would be included in a small historic district.  I would still receive the tax credits and recognition as if I were individually listed on the register.  I am very excited about this!  She is working on the legalities and paperwork and hopes to have the nomination ready to send to Washington, D.C. by the next meeting in April.  Some locals call this area “Mansion Row” or the “West End District”.  The suggestion for the listing on the National Register is the “Florence Avenue Historic District”.  I am very excited!

I received my plans for the turret yesterday!  YIPPEE!  My house currently does not have the turret.  It met its demise approximately 50+ years ago during a rain storm.  Since it was a nonfunctioning room, the previous homeowners did not know that it was mostly rotted.  During a wind storm, a pecan tree fell on the turret and its 40+ year reign came to a halt.

The architect who made the plan, peered over his glasses at me and  said the rebuilding of the turret is going to be “expensive”.  I always find it humorous when someone assumes that we don’t know what we are getting into.  I guess because of our age, both of us are under 30, people think we are a little crazy and we have a hard time convincing contractors, architects, etc. that we are serious.  My husband and I both have excellent, good paying jobs, but…I guess we look broke 🙂

I think it “throws” people when they arrive at our house to give us an estimate.  They look at the present condition of our house and think “these people are too poor to live in a nice new house” and write us off…we usually never hear back from over half of ’em.  It has taken almost a year to find a good contractor who is willing to help us out on the heavy lifting.  We are doing/have done a lot of the work ourselves, but we are just not equipped to move a wall and rebuild a turret…we had to throw in the towel and call in the big guys for that work.

Well, now that I have the plans, it doesn’t look too hard.  I just might rebuild the turret myself 😀 HA!