You will remember from a previous post that I talked about my dog getting out of his kennel. He figured out how to flip up the latch on the side of his kennel. 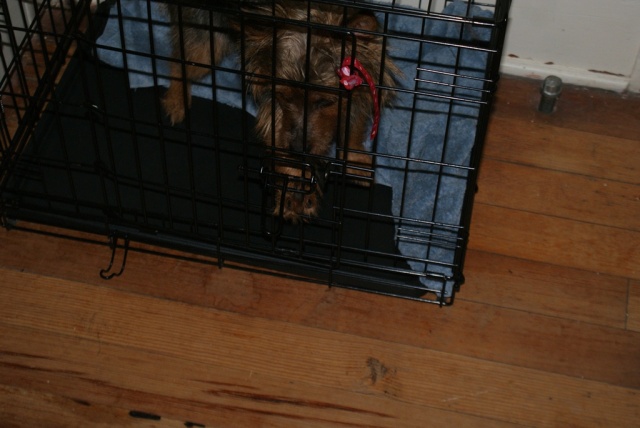 Taavi, flipping up the latch

He's got it down to a science

Long story short, we put a small chain on it and have not had a problem since.  Now he has figured out how to lift the front latch.  Today, as I was trying to complete some homework, Taavi pranced his proud little Houdini lock popping self into the study, gloating over his victory.  I put him back in his kennel….twice.  Finally, I tied a piece of ribbon around it to hold the door closed in the event he flipped up the latch again.  I heard nails clicking on the wood floors and in walks Taavi, again, with the ribbon in his mouth with a grin that only Houdini could have perfected (Is that all you got??).  So….I put him BACK in his kennel, and double knotted the ribbon.  That held.  I had to cut the ribbon later in order to get him out.   I found another chain to put on the front latch too.  As I am sitting here typing this (Taavi is out of his kennel.  I only let them out if they did their business) Sparky is still in his kennel because he is still being pottytrained.  I keep hearing “cling, click, clink”.  I go investigate…..Taavi is trying to break Sparky out now.  I have two dogs on the lam.  Some animals are just too smart for their own good….or for my peace of mind when I am trying to do homework.

Trying to let Sparky out

One thought on “Otherwise known as Houdini”